Last summer, I asked almost 1000 middle schoolers what characteristics they want in a friend. In a global world of virtual reality to which many middle schoolers are perpetually connected, it would be easy to assume that friendship – [real, face-to-face, one-on-one, person-to-person, you-and-I, us, we] – may have lost just a wee bit of its emotional sparkle and human appeal.

That assumption would be wrong.

For all of their external 21st-century tech savviness, middle schoolers haven’t changed at their core. Friendship is still one of, or even the single most important thing in their lives. They all want to have at least one good friend. And they all have definite ideas about what kind of person they want that friend to be.

Of the almost 1000 “good friend” lists we collected, loyal appeared on almost every one, sometimes in numerous iterations, including faithful, true, trustworthy, and dependable. 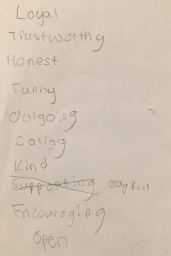 When asked about the best thing a friend could do for them, the most common answer was, “Always be there for me.”

When asked about the worst thing a friend could do to them, the most common answer was, “Turn their back on me.”

The heart of a middle schooler isn’t hard to figure out or understand. It’s probably exactly the same as your heart was back in middle school – and maybe still even now.

They want to be noticed, known, cared for, included, listened to, accepted, and loved. If they can have fun and laugh in the process, bonus.

One thought on “What middle schoolers want in a friend”